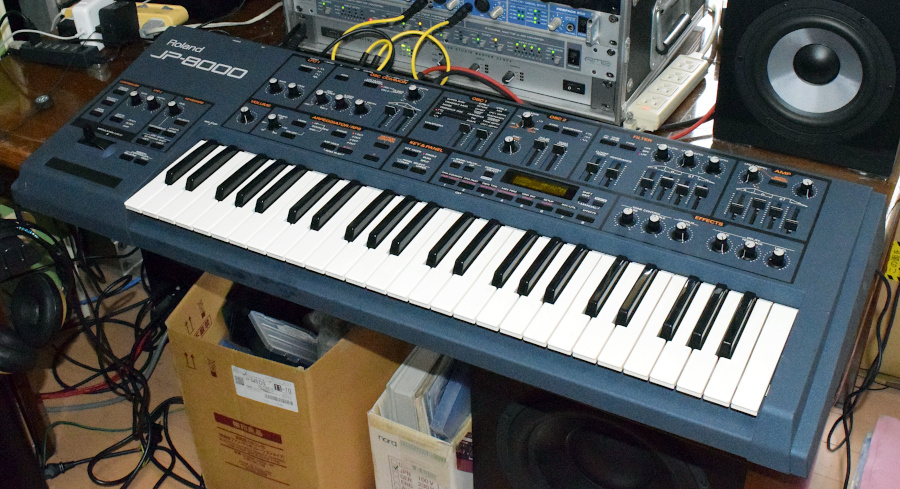 JP-8000 is a digital polyphonic synthesizer released by Roland in 1996. In 1995, Sweden Clavia released "Virtual Analog Synthesizer Nord Lead". Roland countered it with the JP-8000.

As of year 2021, JP-8000 is only available at second hand. It seems that many used JP-8000 have problems such as no sound from the line outputs. According to one engineer's comment, the electrolytic capacitors on the main board of JP-8000 leak over time, and the liquid corrodes the circuit board, making no sound. It would be nice if there was sound coming out of the headphone output, but that might not be there either. The modular JP-8080 also has similar problems. What I bought equips replaced electrolytic capacitors on the main board. It may be different from the original sound. In any case, the JP-8000, which works well, seems to be becoming rare.

The feature of JP-8000 is "SUPER SAW", which is a stack of multiple sawtooth waves. I think the appeal of JP-8000 goes beyond that. The sound is heavy and thick, so the bass tone is very attractive. The keyboard is easy to play (although there is no aftertouch). The reverse T lever enables controllable modulation. The second LFO (LFO 2) dedicated to modulation lever are also nice. Of Roland's virtual analogs released after JP-8000, SH-32, SH-201, and SH-01 GAIA do not have a tone name display, but JP-8000 has. The display is very useful when you want to play tones made by other programmers.

For a while after I got JP-8000 and started using it, I was worried about the floor noise mixed in the output. Since the power supply terminal of JP-8000 is 3 poles, I used the power cable of 3 poles as it is. It improved a little when I used 2 pole power cable and floated the ground. You may want to try 3 poles, 2 poles, and what happens if you reverse the 2 poles.